Not Even A Global Pandemic Could Stop These Fearless Fundraisers

A recent virtual grassroots giving event organized by friends of Albuquerque Health Care for the Homeless raised $43,353.65 as part of the First Day of Winter Campaign you read about earlier.

Since 2003, a group of friends and supporters of AHCH have been coming together each winter to hold a grassroots fundraising event where they can share information about the AHCH mission over bowls of hot soup and desserts made by the sponsors. This gathering, aptly called the Soup & Dessert Fete, has raised awareness for AHCH and cultivated, thousands of dollars to fund the fight to end homelessness in the Albuquerque area. This annual event began with a group of women lawyers who met every Friday morning for breakfast at Garcias Kitchen in downtown Albuquerque. One of the group members worked with AHCH and got them involved with the annual First Day of Winter fundraising campaign. It started small, making only about $2,000 the first year with thirty or so close friends. Over the years, the Soup & Dessert Fete has become quite the winter social event. In 2019 (the last year it was hosted in-person) over 200 friends were in attendance and many others donated though unable to attend. Grassroots events don’t always raise thousands of dollars at first. The draw of the Soup & Dessert Fete has not only been to support the mission of AHCH, but also that it is a casual event of many friends, family, and yes, one of the attorneys hosts the event in their home.

Attendees learned and supported the needs of people experiencing homelessness and knew that AHCH could do more if more people gave more. Over the years, the invitation-only party became a values-driven social event, raising money for people experiencing homelessness while guests enjoyed making exciting new, or reconnecting with friendships that are based in the shared desire to achieve social justice, while eating homemade soups and desserts that, just like the funds, were brought by many.

Despite the current public health crisis, the group of friends, chose to continue to move forward with the 2020 “non-event” because they believed their giving would help AHCH expand outreach efforts and deliver medicine to people who couldn’t make it to the clinic.

Why has this successfully grown from a small idea into a great grassroots party?

Their advice: Keep it simple. Pick a date. Send out the information to your social and professional circles. Once that is done, don’t stress. Just go with it.

This group insists on doing something to end homelessness. It “touches people at a philanthropic level, but there’s more to it than that. Some are in a position to create change for those that have not been as fortunate as they have been and for some, it’s personal. They all believe, trust, and have an interest in AHCH,” said a donor about the Soup & Dessert Fete fundraiser.

In an interview with AHCH in 2019, Maureen, a donor and friend of the original breakfast group said, “There’s no pressure to have it. We make strides towards ending homelessness and see each other socially.” In 2018, their grassroots giving event Soup/Dessert Fete raised over $28,000 for AHCH. This year, only two years later, and despite being held virtually, this grassroots event raised more than $43,000.
Raising vital resources with your loved and trusted friends for a cause that matters to you can be a magical experience. Let us help you. For information and support, call the AHCH Fund Development Program at 505-338-8038 or visit the website at abqhch.org. 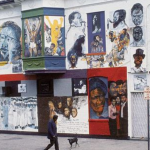